Written by Zinc Product Team
Updated over a week ago

What are Group reports?

The Group report shows administrators the level of activity broken down by each type of Zinc group (Official, Ad hoc, as well as unnamed Ad hoc groups.) This report helps administrators:

Named Ad Hoc Groups are messages sent between groups of users that are not official groups. They have a named assigned to them and can be created by anyone.

Unnamed Ad Ho Group are basically the same as the named one, except there is no assigned name to the group. The title will just have the names of the users that are in the conversation. (Ie - Ross, Kyle, Mandy and Jennifer)

What do the different reports show us?

Top 25 Group by Message volume- This report shows you which groups are the most active in your organization. In this example the most active groups are Weather Safety alerts and the South East field team, sending 54 and 40 messages in the last 6 weeks.

Recently Active Official Groups & Ad Hoc Groups- These reports let you know which groups are being used on an ongoing basis. This helps management better understand

Groups created- This reports shows Named Ad Hoc, Unnamed Ad Hoc and Official groups that have been created in the time period selected. This helps management get insights into the topics or problems that may be occurring in the field and are being discussed in newly created groups.

Group List- Get a view of all the names of the groups that are currently in your organization. This list can be sorted by title, type, current members, messages sent, days inactive or creation date.  You can also search for any group by it's name. 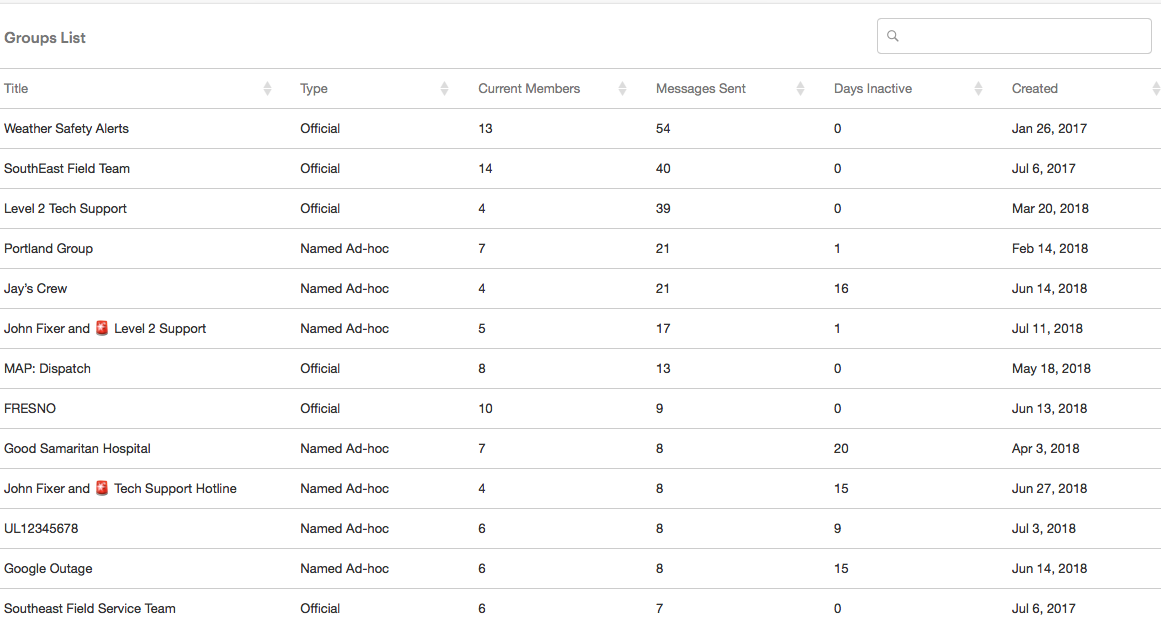 Need further breakdown or a view of the information in another format? You can always export all Group Activity data by clicking on the Export data and get a CSV file of all the raw data.